The Day we went to the Majestic Mt. Pinatubo 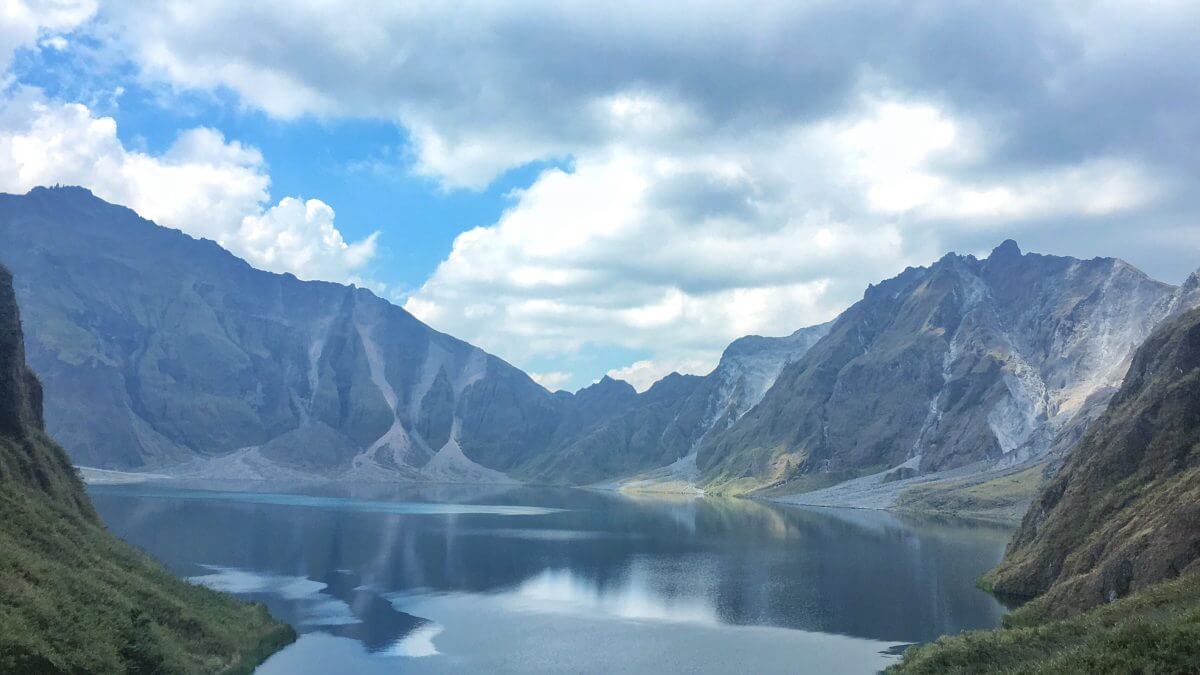 We started at Tagaytay and found our way to Laguna. We went to Laresio Lakeside resort and Spa. They have tons of water sports activities, but we were not able to try. I guess because we were tired or maybe the lake is not that inviting. It was nice to watch groups of young people having fun, most of them probably college students. My energy was not that good because I lost my voice. Maybe because I laughed so hard during the wedding we attended the day before.

After Laresio, we went to Manila and stayed at the condo we rented via Airbnb . It was very nice at an affordable price! We prepared for our Pinatubo adventure and went directly to our meet up the place!

This is how our day went….

We took Uber to McDonalds Shell Emerald, F. Ortigas road corner Sapphire road, Pasig City. Also known as Emerald Avenue. I was with Hernan, Sheina, and Bib. We met our friend Dmae, and her friend Lyka in the meetup place. The tour coordinator had a little orientation about the tour and we paid our remaining balance of the package. Also, we had to sign the waiver form in case we had some accidents or whatever. Of course, we all hoped nothing would happen.

We had our breakfast at Mc Donald and bought some food and water in the convenience store beside it. We also bought a packed lunch. Also, it was instructed that we will go straight to the base camp and we have no stop. We took off at 0220 and begun our 4 hours’ journey. We were 6 in our group with 3 other girls. Since we didn’t have enough sleep, we made sure to sleep on our long drive to gain a little energy for this adventure. To be honest, I didn’t expect we would need more energy than what we had.

A bit of simple advice from someone who always does this. Always take enough sleep in every adventure or activity! Especially if it involves hiking. It could be near or far but it’s always good to have a healthy sleep.

We arrived at the base camp a few minutes before 0600. A nice hue of colors greeted us. It was a bit cold and the good thing was I had a warmer with me. We had a little orientation with the entire people who booked this tour of the day. We were quite a lot, but we were divided evenly.

They gave us some sunblock to protect our skin when the sun will rise with its heat.

We took a single photo of the entire group and begin to transfer to our respective vehicles. Some had a 4×4, some had 6×6. We were nine in the car including the three other girls.

On our way, it was not too dusty as I expected it. Maybe because they said it rained during dawn, and the sand was kinda moist. We needed to cross the river and saw a car stopped in the middle because it had a hard time crossing. They said it was normal, and during our turn, I was hoping we can cross it successfully, and we did!

It was early morning and oh gosh, what a nice view we had. Never expect it to be this beautiful. I saw some locals with their carabaos. Greenfields across the huge, beautiful mountains in the vast sand of lahar. It was so beautiful that I was in awe.

We also had to cross some hills, and a four by four truck is a must for this kind of road. We were just holding with our strength not to fall off. Take note that we had no seat belt during the course. It was a bumpy ride, but it was okay, it’s manageable. I promise.

We passed by this field of yellows and greens, and look at this yellow car, it looked cool. What do you think?

After our off-road adventure, we stopped at the jump-off. We gathered by group and met our guides. We had 2 each. The hike is approximately 7 Kilometers and would take more than 2 hours walking. I thought it would be an easy trek, and I was wrong. We passed by big boulders, cross a river and walk in a vast field. The trail was uphill and downhill course. It was mostly an open area, with not so many trees to cover us from the heat of the sun.

Along our way, we passed by an Aeta Village. Hernan, who loves languages was able to mingle with the natives and as always, ask some questions about how they will say it in their language, Sambal. I, on the other hand, was having fun interacting with them. We had a couple of exchange languages. 😀 They taught me some of their own too. Like the ‘puppy’ in Sambal is tuwi and the ‘dog’ is aho.

It was so fun that we two took some time talking to them. Our group-mates were waiting for us to continue the trek. As we must go together, we had to say goodbye to them. If only we can spend maybe a week with them that would be nice! It’s very interesting, right? Hernan and I would be like Tarzan and Jane in the live-action movie, living in a village with the natives. But on a serious note, I do want to experience that. It would be a great learning journey and an awesome story for sure.

1100 Arrival at the crater lake of Mt. Pinatubo

After 2 hours and a half, we made it in the Mt. Pinatubo crater. It was so beautiful that I thought I can only see it in the pictures. My photos of it can’t justify its beauty. Like what they put in their welcome sign, it was truly majestic!

We settled under the shade of a tree and had our lunch with this pretty view. At the crater, there are vendors who sell some refreshments and food at Php100.00. All items are at the same price.

We went down to the lake and took some photos and videos. It was really beautiful.

Before we went up, a guide told us that the water of the crater before was higher than the stairs were about to take. The marks of the mountain on the left side facing the lake was the amount of water before. It was crazy to imagine how deep was the lake then.

After some time at the crater. We had to take the same route going back to the jump-off point. This time, it was more tiring but I guess a little bit easy since we already know our route.

I was in the jump-off and I was already seeing the vehicle when my pinky got hurt while I was walking through the boulders. Believe me, it hurts more than any part of the body (not including the heart. Haha.) I had to walk slow and ease the pain.

I had to signal number two (poo) during our hike because of nature calls. Hahaha. And we waited with the other group (the three girls) so that we can go together as a group.

This time, we were out! 2 hours more and this adventure would be over. We were so tired that even if it was so bumpy we managed to have a little nap on our way. Also, at this hour it was so dusty! Very dusty that we can’t even see much.

I didn’t manage to bring any clothes to freshen up from the dusty ride. I washed up and changed my top but still wearing my dusty leggings. 🙁 I was so dirty and so tired. Take note that my pinky was in the sore. I could barely walk! It was so painful.

1730 Departure from the base camp to Manila

The moment we arrived at the van we had a certificate that we did the hike and went to Mt. Pinatubo. 😀

We were all dead tired. Dirty and tired, but we did not care at all. We slept our way to Manila and got at 2230 back in the Mc Donald where we met up.

Watch the video for more!

So just in case, you want to visit Mt. Pinatubo here are the things you need to bring.

It was a great experience and you should try it too. We booked our package through Pinatubo Tours and I highly recommend them. They have very nice guides and they are on time.

So what do you think of this adventure? Are you gonna try it? I would like to hear your thoughts on the comment box below!

Welcome to my humble space! In this blog, I'm sharing with you how I’m trying to survive my adulting phase while doing the things I love...especially TRAVELLING.